For almost 15 years Blue Valley Ranch has carried out a proactive and adaptive forestry program that has focused on promoting healthy forest ecosystems and recovery from the impacts of the Rocky Mountain Pine beetle.  A subsequent monitoring program has included vegetation data, forest health evaluations and stem-counts to track how well the ecosystem responds to clear-cutting and thinning operations.  However, no monitoring technique can tell a story as well as repeat photography, where pictures are taken from the same established photo-point at approximately the same time of year over time.

One of the best photo-points was installed in 2004, just after the first of the ranch’s timber treatments was completed the previous winter.  Note the stump in the left foreground of each photo, which helps the photographer frame photo re-takes to match from year to year. 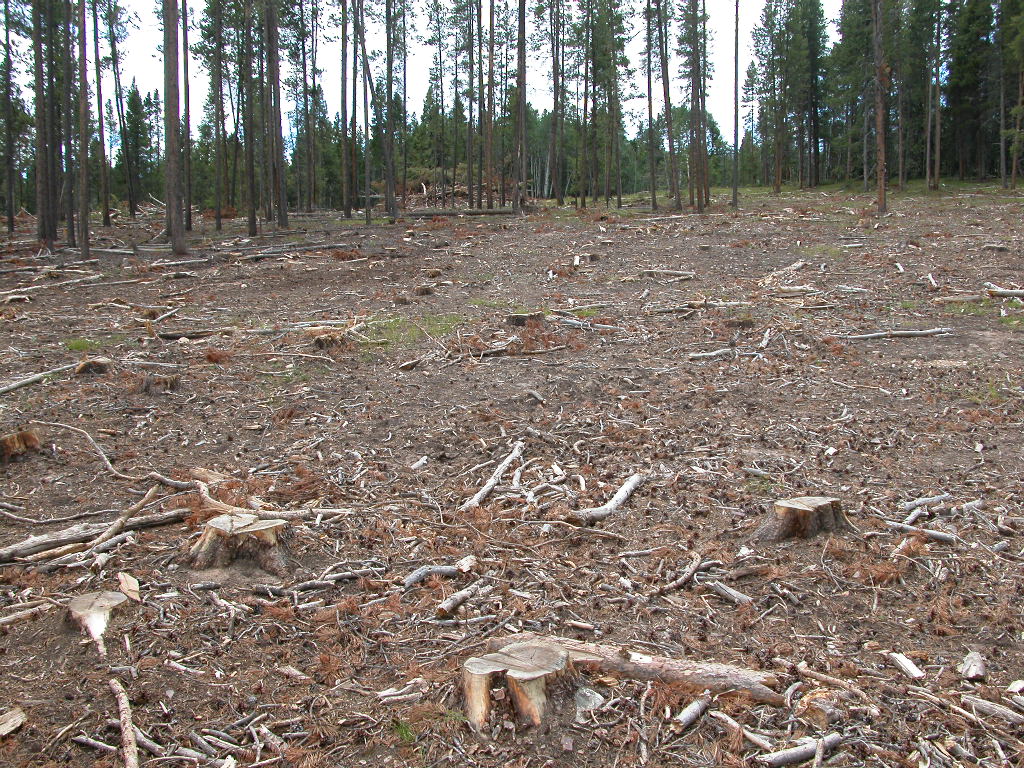 2004 – Unfortunately, the first season following treatment always looks a little rough.  Understandably, this is often what prevents landowners and managers from making the decision to initiate timber harvesting.  Vegetative species richness (total # of unique plant species present) is at 12, which is no different than in un-treated areas nearby. 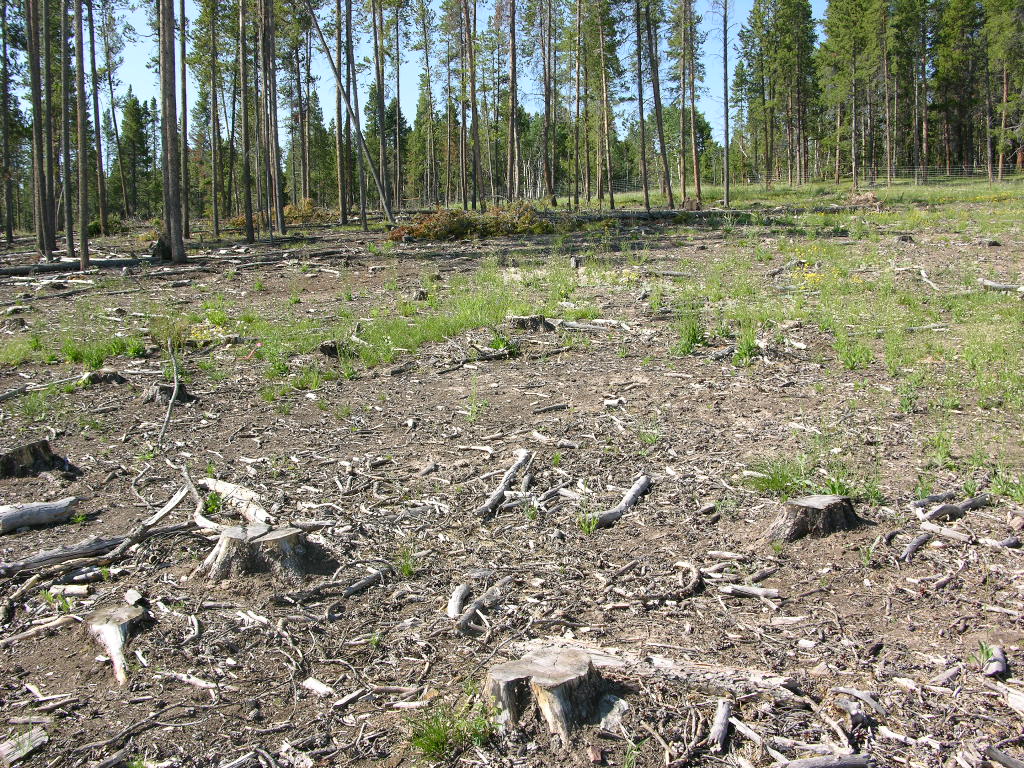 2005 – By the second season, grasses and forbs have begun to show up, and species richness has almost tripled.  Though not readily visible in the photo, lodgepole seedlings have already become established, at a rate of about 800 stems/acre. 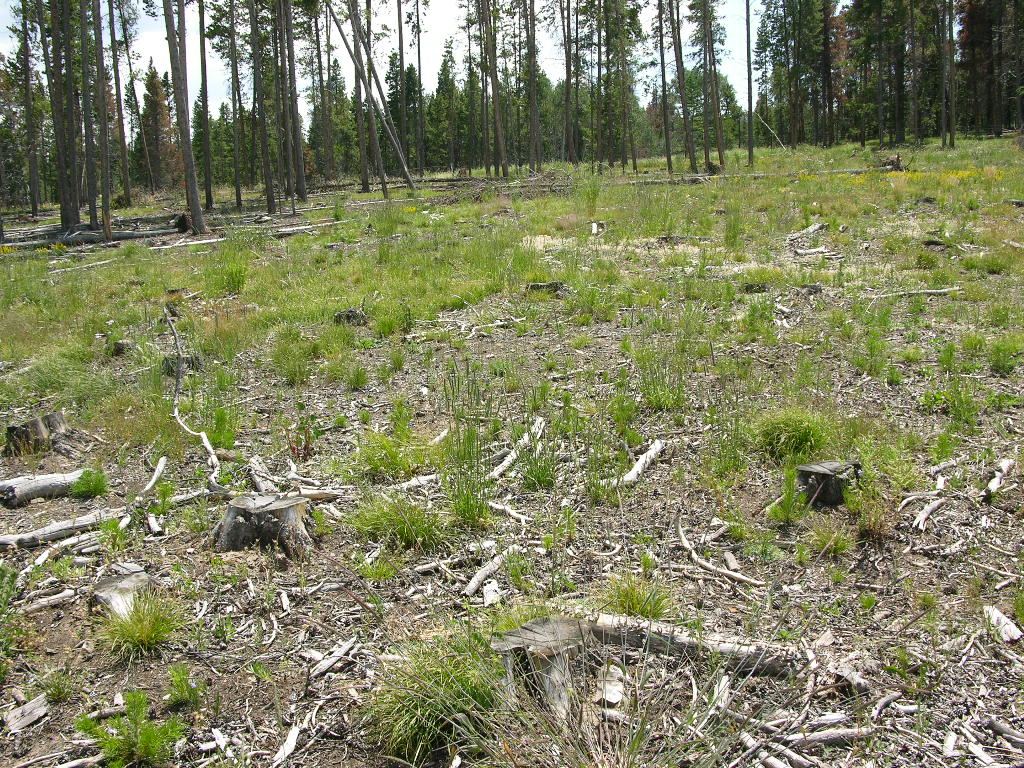 2006 – At year three, the treated area is starting to look a lot greener as new grasses and forbs establish across the whole area.  Species richness has increased again, to 40 unique species of grasses, forbs, shrubs and trees. 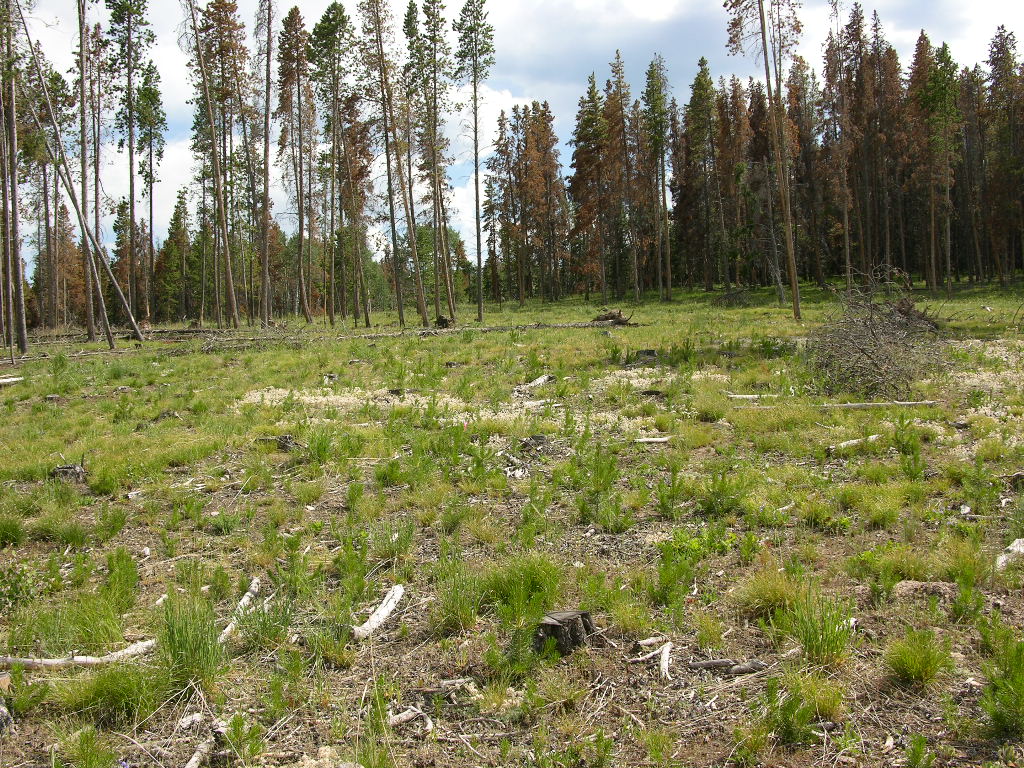 2007 – After four years, the treatment is looking more like a meadow and species richness has increased again.  We counted 543 lodgepole pine seedlings in this 1/10th of an acre plot, which calculates to a stem density of 5,430 per acre.  This is much higher than a mature lodgepole forest, which means that this area will need to be thinned within the next 10-15 years. 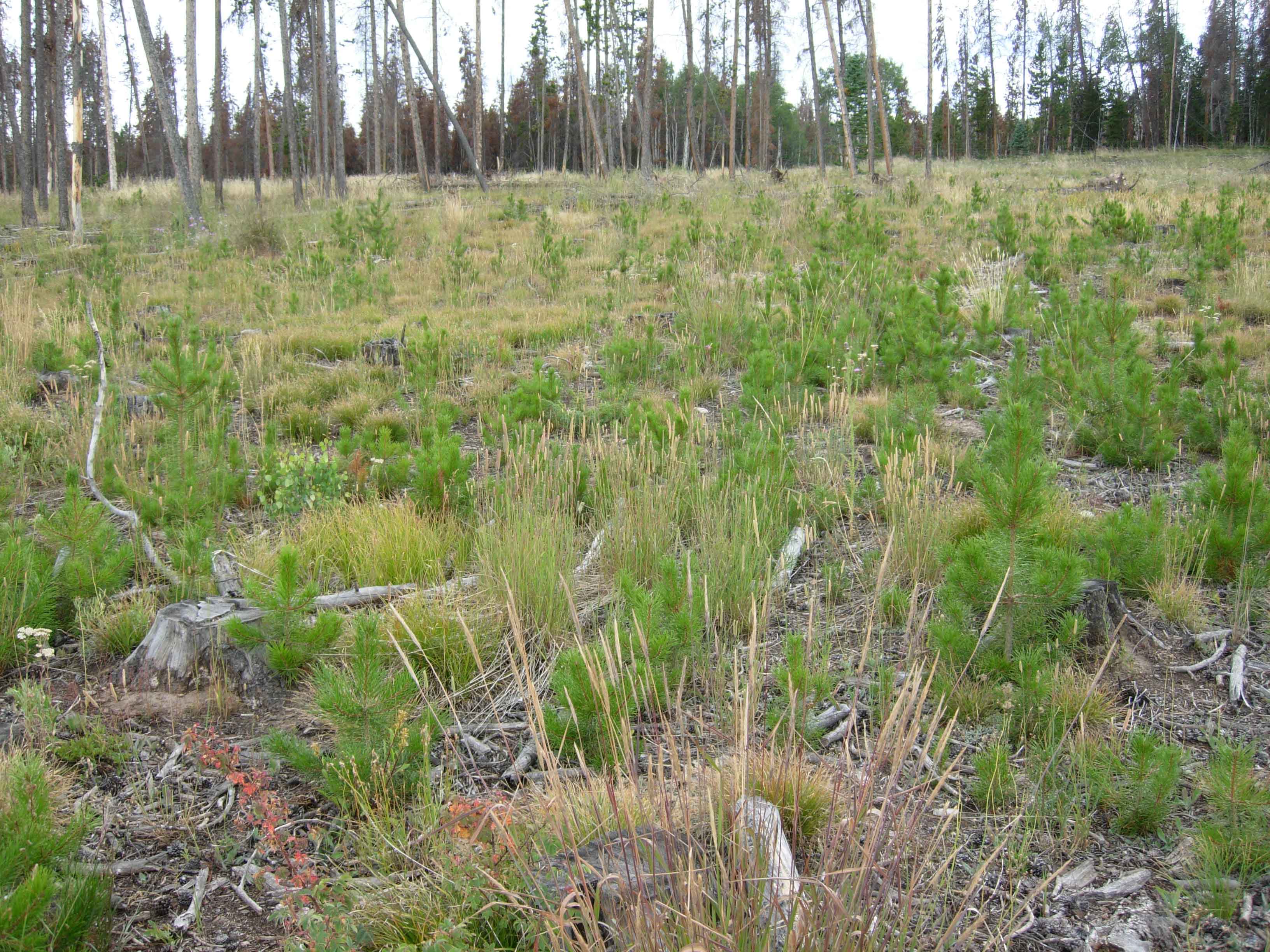 2008 – The lodgepole regeneration is very apparent at five years, as 18-24-inch seedlings are beginning to dominate the site.  Species richness is the highest yet, at 50 unique species.  Perennial grasses and forbs are well established, and nearby utilization cages (which are used measure the total weight of all plants that grow during the season) show over 4 times the forage production of 5 years ago. 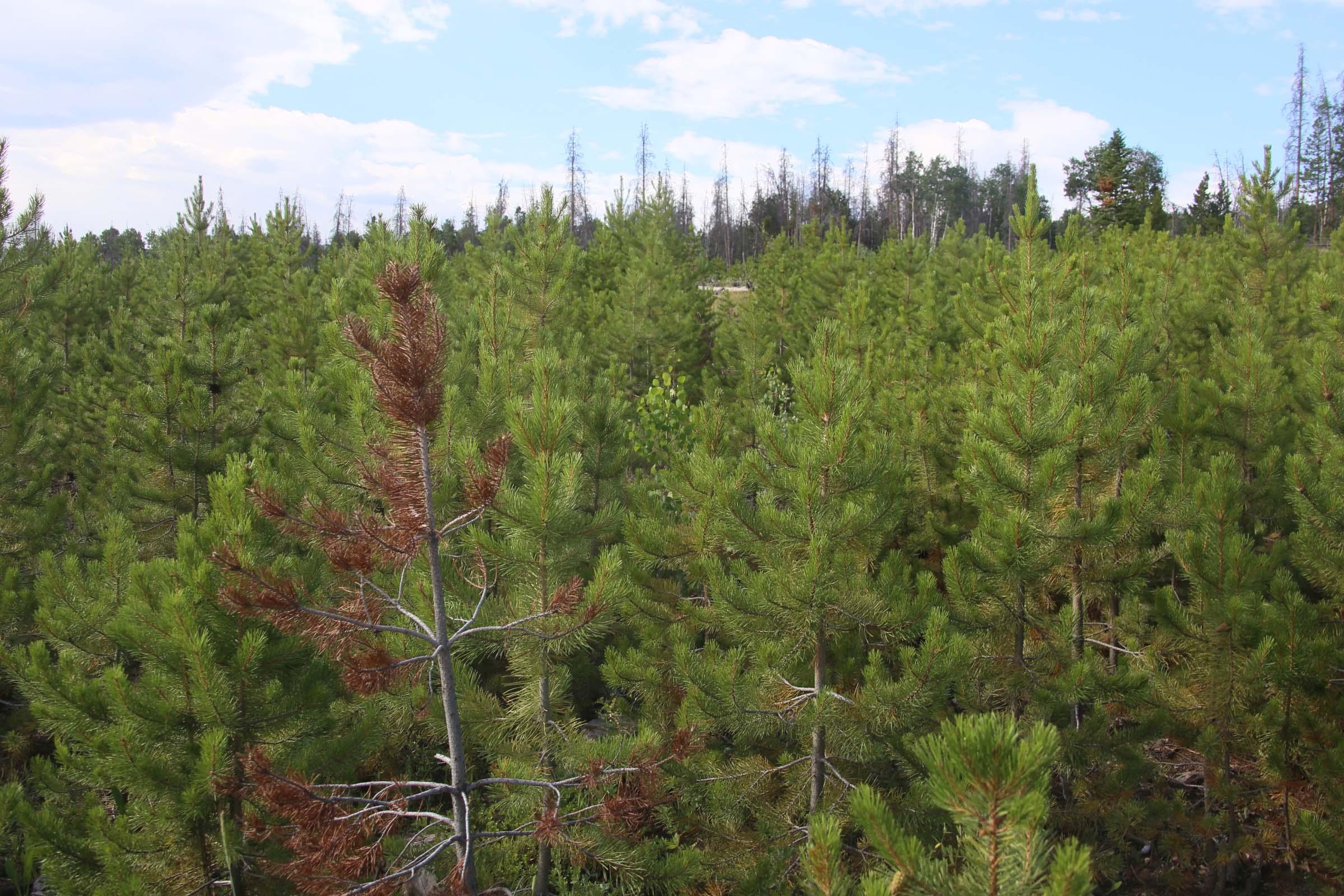 2014 – After eleven seasons, the site is looking like a lodgepole forest again.  While no vegetation data was taken along with the photo, the 6-8-foot trees are obviously towering over a thinning undergrowth. 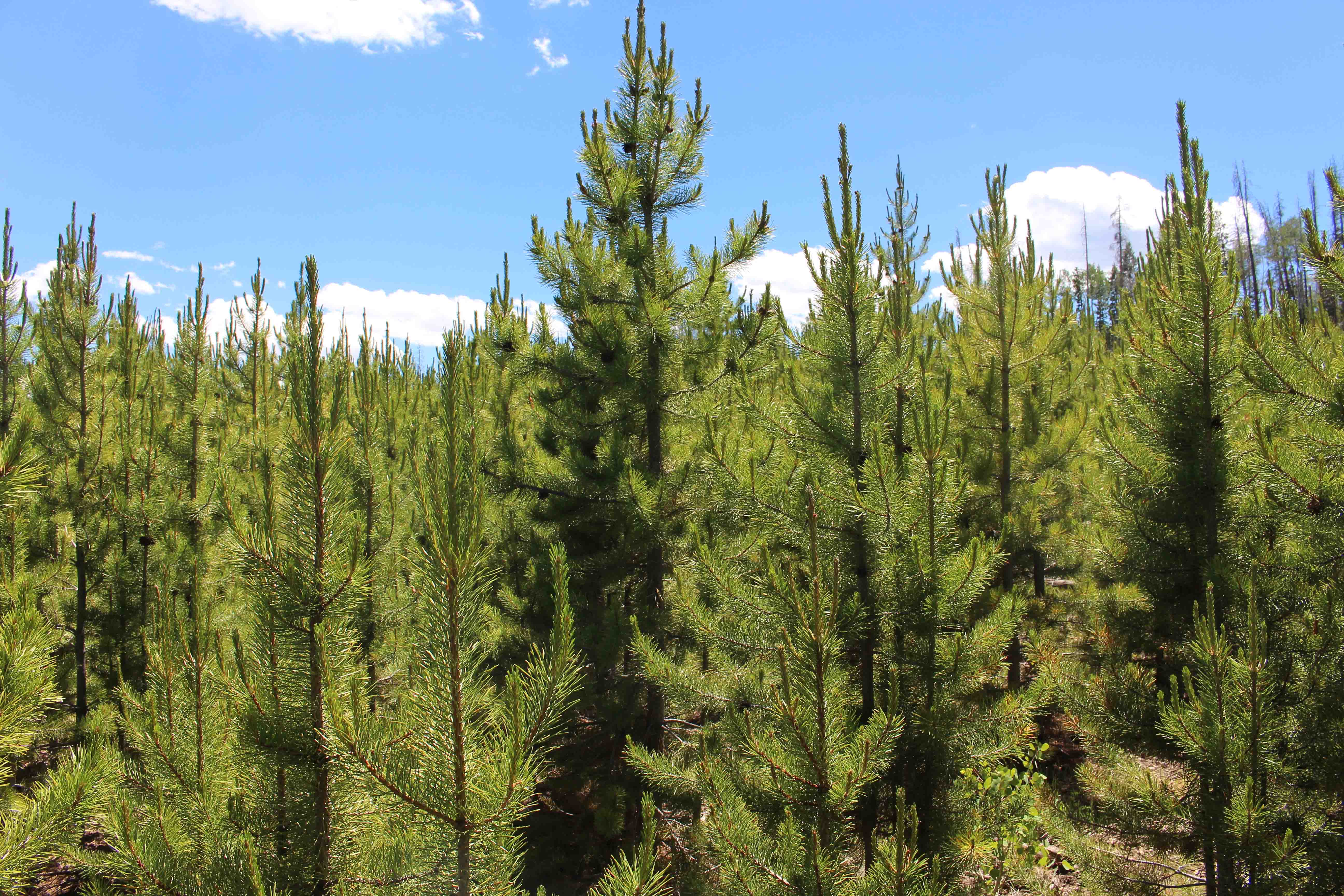 2017 – Thirteen years later and some of the young trees are over 10 feet tall now, which made it difficult to even find the photo-point.  The lodgepole saplings are clearly dominating the site and will need to be thinned in the next few years to eliminate competition between individuals and allow the healthiest trees to grow to maturity.

For the past thirteen years, photos and vegetation data have documented exactly how this forest has recovered from timber treatment, highlighting successful regeneration of lodgepole while clearly identifying the need for continued management from thinning.  Repeat photography is a quick way to capture a lot of information and compare trends over time, and hopefully the next decade or two will reveal even more insights to the effects of forest management over the long-term.